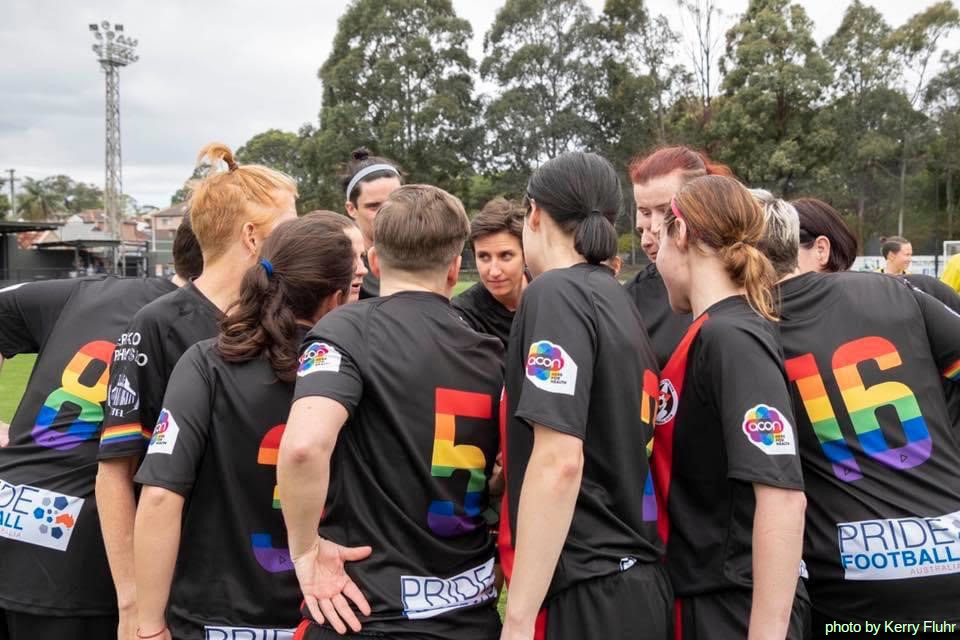 In Sydney during the early 1980s, a time of expanding – albeit still minimal – visibility and representation of LGBTQ+ people in Australia and around the world, the Flying Bats Football Club (FBFC) emerged as a distinct community in the Sydney scene for lesbians and queer women to come together and play football. Over the past four decades it has thrived, earning the status as the ‘largest lesbian football club in the world’. It has an inspiring history as a continuously evolving space inclusive of queer cis and trans women, nonbinary people, and their allies, where players can develop not only their soccer skills, but community and friendship through regular social events (pre COVID!). Each year it recruits a broad range of players, spectators, and volunteers, underpinned by its active inclusion policy and celebration of ‘football for all’.

As a club that first emerged as part of the dynamic history of lesbian activism and communities in Sydney, its core values of gender inclusion and queer pride make it a pioneering club for all women and non-binary people in a women’s football comp. The club has advocated for and achieved explicit inclusion of trans and non-binary players in the regulations and registration systems in the competitions in which it participates. It has also shared its gender and sex diversity policy with other clubs and associations across football and other sports to help them develop their own inclusive principles. The Bats stand out in this regard, and if you go to any Bats game on a Sunday you can see how much our players enjoy and thrive in this community. As one current player, FBFC’s committee member Katie Morrison, recently noted in an interview for abcqueer, the club’s active use of gender neutral language, its pride in queer identity and community, made all the difference in their joining a women’s football comp as a non-binary person. “I had nine years off soccer after playing as a kid and I don’t think I would have started again if I hadn’t found the Bats… “The Bats is the club for me because from the very beginning I just felt like I belonged.”

The club’s open call to any player interested in football, whether completely new or experienced, is also a critical way that FBFC promotes women’s inclusion in football. As we know, gendered socialisation from a young age can seriously discourage women and girls, and anyone outside Australia’s dominant and often cis-male oriented sporting culture, from taking part in sport codes and competitions, or as seeing these as something for them (though thankfully this is changing at record speed). For me, a cis woman and lesbian growing up in Sydney, team sport was something I connected with comparatively late, in my twenties, parallel to coming out and finding my lesbian and queer community in Sydney. The two are inextricably linked and have offered me, and many others in Sydney, a space to feel empowered, safe and sporty.

Two new members on the IGLFA Board